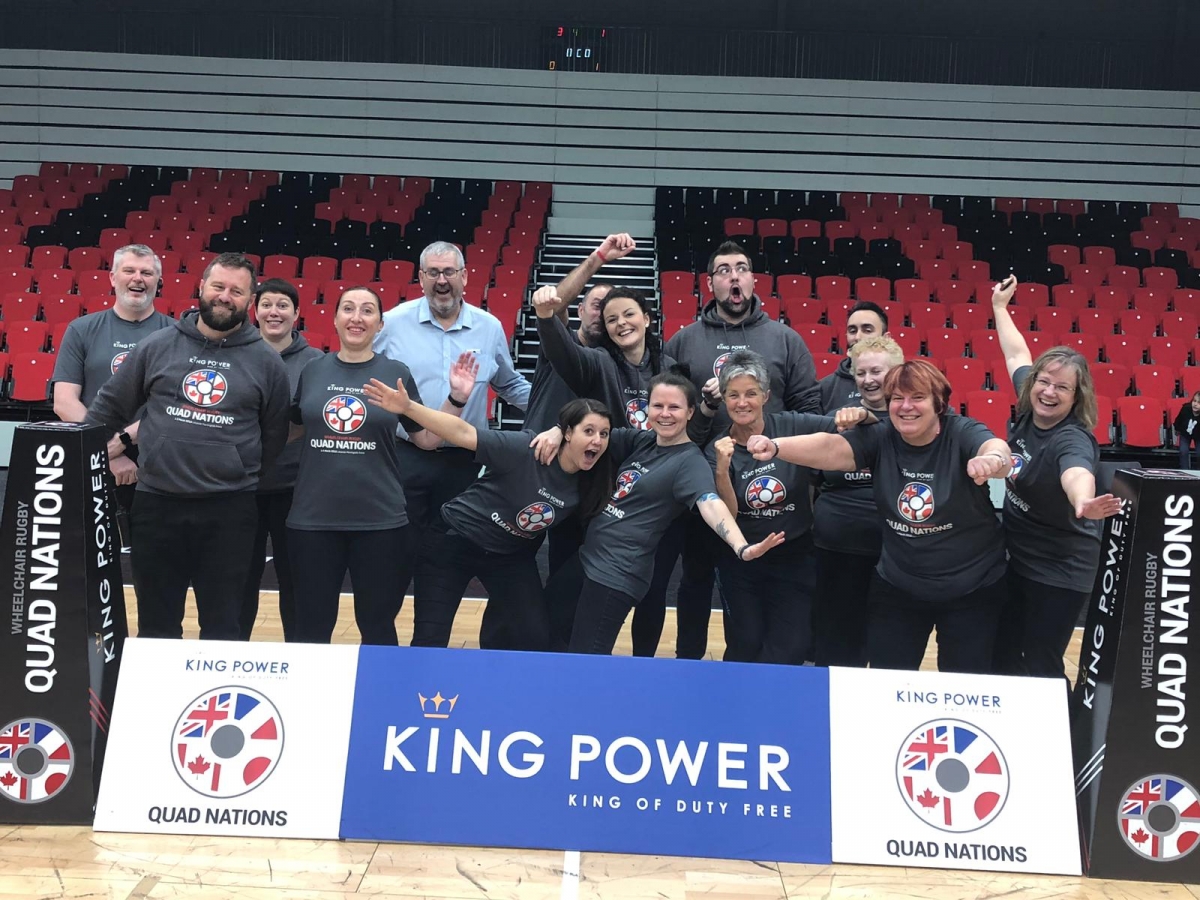 It's Smashing being a Smasher

After the first event in March 2018 not only the participating teams, but also the crew behind the scenes were looking forward to the new edition of the tournament.

Volunteers from all over the world, i.e. from Australia, Germany, Poland and Great Britain came to Leicester in the end of February, to build up a smashing team - taking their holidays, travelling on their own expense - just for the love for the game and the Wheelchair Rugby family. The Smashers team wasn’t big - around 12 people. They worked as a unit, taking care of the success of the tournament, but also taking care of each other and functioning as a strong but very fun-spreading unit. They would support the teams from Japan, Canada, France and host Great Britain during the practice and the match days, preparing the arena, taking care of spectators, helping with media-work and merchandising and keeping an eye on everything, to make the King Power Quad Nations 2019 successful.

Smashing Michelle and Nadine from Germany

Michelle from Germany attended the Quad Nations for the first time, alongside Nadine a two-time Smasher. Both are experienced volunteers in Wheelchair Rugby and were absolutely excited, to be part of the second Quad Nations.
'Friends told me a lot about the tournament. Taking this experience and meeting some of the best rugby teams of the world was my intention, to take part at the Quad Nations as a volunteer“, Michelle
'The first run of the Quad Nations was impressive and so much fun. It was no question, to return for the 2019 tournament to Leicester as a Smasher again. Not only for supporting the teams and the success of the tournament, but also for meeting the incredible Smashers Team again. Our team worked as a strong unit in 2018, that was impressive, so much fun and heartwarming. I was looking for the reunion for the last twelve months.“ Nadine

As a Team Liaison Officer (TLO) for host Great Britain, Michelle experienced an exciting week, becoming welcomed into the national team easily.
'I liked to support team GB a lot, they are an awesome bunch of people' Michelle excitedly told us after the final whistle.
'I met team Japan at the World Championships 2018 as their TLO, when they became the World Champions. So meeting again now at the Quad Nations was amazing and a lot of fun for all of us', says Nadine.
The Germans were impressed with the organisation, the venue and the excitement of the spectators of the 2019 edition of the Quad Nations.
'The organisation of the whole tournament was excellent and working with these high quality teams as well as volunteers who are like minded as you is always a lot of fun and gives you a great time.'

Paul is an experienced, long-time volunteer as well. He has been with the Smasher-Team at the debut of the Quad Nations in 2018 and knew already on the very last day of the tournament in 2018, that he would return to the next edition in 2019.
'I volunteer for the Quad Nations, because it gives me the opportunity, to meet and work with lovely and like minded people. We are there, because we want to be, not because we need to be. That's what makes it special' he says.
All the way from down under: Aphrodite from Australia

Aphrodite is a rookie in Wheelchair Rugby, but actually a smashing volunteer, taking each obligation with 110%. The first time ever, she got in touch with the sport, was Sydney 2018, where the experienced member of the Australian Navy was in charge for supporting the World Championships.  What was her reason, to come over all the way from Down Under to Leicester, spending her holidays as a Smasher at the Quad Nations?
'It’s the athletes, who are truly the masters of their game and the volunteers, who come together to ensure the events success“, she explains'
The women’s match was a real highlight for Aphrodite during the week: 'It was full of excitement and nail biting moments.
We are very sure, that we will meet our smashing Australian soon again at the Quad Nations 2020.

What is volunteering all about?

'It is the greatest experience, to meet new people, while you work in an awesome team, and it is amazing, to run an event from the beginning till the final end'. Michelle

'You learn new skills from like minded individuals, who value add to an events success', says Aphrodite. 'It’s about team building, making new friends whilst travelling the world to support the great athletes who are the heart of the Quad Nations'.

All smashers want to encourage people, to volunteer within sport.